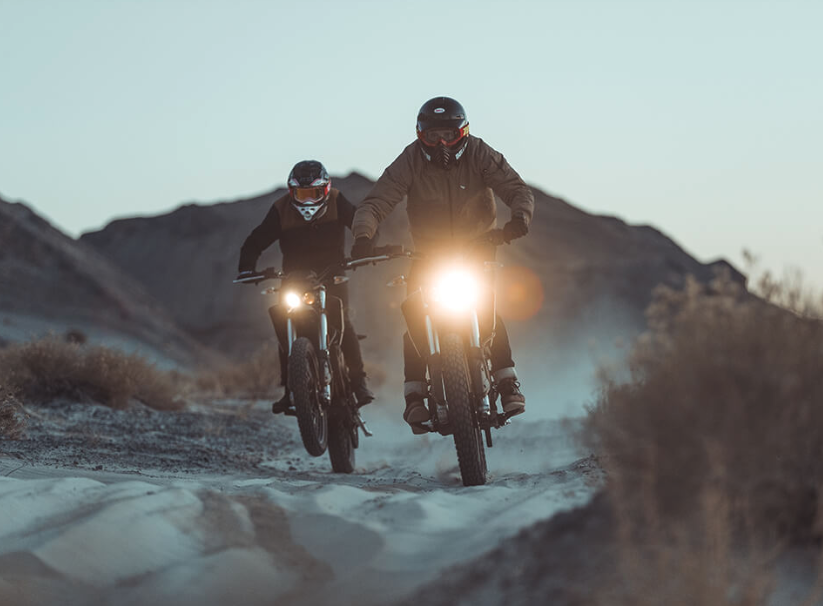 This is an article about the best electric dirt bikes for 2020. I have added my professional opinion as a dirt bike rider, but also we did research and surveyed my fellow dirt bike riders to get you unbiased results.

The electric dirt bike world is slowly seeing some of the big dirt bike manufacturers jump into the electronic dirt bike game.

I wonder how long it will before all of the big dirt bike companies jump on the electric dirt bike train?

The dirt bike industry is aware of the differences and the benefits of the electric dirt bikes over gas-powered ones, and they must invent to stay ahead of the competition.

Right now, KTM, who is arguably the biggest dirt bike manufacturer in the world, makes what I would consider the best electric dirt bike for 2020.

I didn’t include the electric dirt bikes prices since that can be relevant.

Keep in mind that we have few electric dirt bikes for the younger population too. If you want to find out the list of best electric bikes for adults, click here. Some of them can also handle the road while going off-road.

Keep in mind the following electric dirt bikes are not quite like a full-size enduro or motocross dirt bike. However, they are dirt bike riders top 3 choices of a real dirt bike that runs on electricity.

For the choice not to be biased by my opinion as a professional dirt bike rider, my electric dirt bike team has done a survey.

We consulted real motorcycle riders, and we will implement the final survey and research about which are the best electric dirt bikes and why, very soon. For now, here are the top 3 contestants that have been chosen by fellow electronic dirt bike enthusiasts. Interesting enough, most of my dirt bike colleges said that we must include Alta Motors Redline MX bikes, but Alta Motors closed their doors. However, you can still buy one on the used market.

Below we have the unbiased choice of the top three electric dirt bikes.

The all-new 2020 KTM Freeride E-XC is a cross between a full-size enduro/motocross dirt bike and a trial dirt bike.

The 2020 KTM Freeride is powered by a Lithium-Ion KTM Powerpack that can be removed. This allows you to buy an additional lithium-Ion KTM battery to swap easily when out riding for the day.

The KTM Freeride E-XC is a single-speed automatic that produces 24.5 max HP.

Do not let the low horsepower fool you…

The torque you can get from an electric dirt bike is outstanding…42 Nm.

It will take you 1.3 hours to fully charge the KTM PowerPack battery.

Built with a steel composite frame, the electric Freeride will stand up to any abuse you throw at it.

WP Xplor PDS shocks are stock on the 2020 Freeride E-XC. If they are anything like the Xplor 48 shock on the KTM XCW models….well, let’s say I think they will be perfect.

Zero Motorcycles is a company that is dedicated to making just electric motorcycles.

I like this as the crew at Zero Motorcycles have put their blood, sweat, and tears into making electric dirt bikes.

Zero built the 2020 FX models for on and off-road applications, so their electric motorcycles might be more comfortable.

Whats the difference between the ZERO FX ZF7.2 and the Zero FX ZF3.6?

Cake is a company based out of Sweden, and they are passionate about making electric dirt bikes as well.

If you look at everything, the 2020 Kalk OR is more closely related to a dirt bike.

The large sprocket and the Front forks make me think electric dirt bike.

Below we also have a list of all the kids and adult electric dirt bikes that you can purchase.

The Razor SX500 is an entry-level kid electric dirt bike.

This is perfect for your kids to get introduced into dirt biking. There is no pipe to get burnt, no gas, and weighs less than a gas-powered kids dirt bike.

They can start it themselves with an on/off switch and it is pretty quiet so they aren’t scared of the sound.

Knobby tires are included to allow for good traction in the dirt.

The color and graphics on the Razor SX McGrath edition are inspired by the legendary motocross champ Jeremy McGrath.

Top Speed on the Razor SX500 McGrath Edition is 15 MPH and you can ride it for 40 minutes.

The Kuberg Cross Hero is built with a high-quality 77lb frame that will support up to 220lb rider.

You can ride the Kuberg Cross Hero for around 2 hours of use which is actually pretty good.

Top speed is limited to 17 MPH but that’s pretty fast. The 3000 watt electric motor was built to handle the abuse that comes with riding dirt bikes.

The Kuberg Cross Hero is watertight allowing your kids to ride whenever they want without the worry of water ruining anything.

Kuberg also built in the ability of the parent to adjust the speed/power of the Kuberg Cross Hero. This allows the child to ride the bike according to their abilities.

This Razor 650 is a great bike to have around while your kids learn how to dirt bike or is a good practice bike for your kids.

It comes with a full suspension and front and rear disc guards.

The Burromax TT250 is an entry-level budget kids dirt bike

The Burromax is another electric dirt bike option for your kids.

The TT250 comes in 4 different colors and can also be upgraded. You have a rear disc for your brakes and a kickstand.

The Burromax also has 2 different speed settings. The top speed on the Burromax is around 14 MPH and the low setting is 7 MPH.

You do get a front working fork and rear shock for a smoother ride on the Burromax dirt bike.

They say that the battery will last around 14 miles and takes up to 8 hours to charge.

MotoTec has built an electric dirt bike that will make your kid feel like they are riding a real big kids dirt bike. The black styling with the black rims makes the MotoTec 24V dirt bike look good.

It comes with full suspension that is motocross-inspired. Front and rear disc brakes for great stopping power.

Your kids and ride this electric dirt bike for up to 1 hour and cruze around at 15 MPH.

You can still pick a Redshift on the used dirt bike market.

The top speed on the Redshift MX is around 50 MPH and the battery will last for around an hour.

But what makes the Redshift MX unique is how well built it is. It comes with high-quality parts all around the dirt bike.

The Alta Motors Redshift comes with WP suspension in the front for the fork and WP for the rear shock.

The brakes are what you would come to expect on a well built high-quality dirt bike.

This is the BEST electric dirt bike you can buy….I didn’t list it above because for 2020 you cannot buy a new one as Alta Motors sadly closed their doors in 2019.

If you can find one on the used dirt bike market get one!

The Electric Motion Escape is a mix between a trails dirt bike and a full-size enduro dirt bike.

Based in France the team at Electric Motion is passionate about bringing the dirt bike market an electric dirt bike that is fun, quiet and competitive.

Built from high-quality dirt bike parts the Electric Motion Escape is for those who want to ride their dirt bike on single track.

Top speed on the Electric Motion Escape dirt bike is around 40 mph.

EM Escape is lightweight and comes with full suspension and high-quality brakes.

The Kuberg FreeRider is built for teenagers and adults

The Kuberg is an electric dirt bike that allows you to ride for around an hour. The Freerider is setup with high-quality parts including the front forks and rear shock.

The brakes are of high quality as well.

This is a very lightweight and powerful electric dirt bike (79 lbs). You can hit top speeds of around 34 MPH.

When you are done riding you can get back on the trail in 2.5 hours.

Kuberg Freerider comes with a couple of different tires sizes for you to choose from.

The Sur-Ron dirt bike comes with a few unique features that are worth mentioning. In sport mode, the Sur Ron MX offers Regenerative coasting and recharges the battery when you let off the throttle.

Panasonic makes the battery that is in the Sur-Ron electric dirt bike. If you want the Sur-Ron MX to be street legal the top speed is 20 MPH but there is an easy modification that you can do to turn up the power/top speed.

When setup in the street-legal mode the Sur Ron dirt bike will give you 62 miles of range.

The battery is swappable and comes with a full suspension and front and rear brakes.

We added this in this list as an electric bike worth mentioning.

It’s lightweight and has really great range. Up to 60 miles.

Hopefully, we will continue to see other dirt bike brands enter into the 2020 electric dirt bike race.

Don’t forget to check our blog about electric dirt bikes, and please let us know what you think in the comments below.